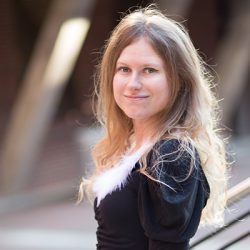 Luba Elliott is a creative producer, curator and researcher exploring the role of artificial intelligence in the creative industries. Having originally studied Modern Languages at Cambridge University, she trained as a human-centered designer at the Hasso-Plattner-Institute’s d.school in Potsdam. Since then, Luba has worked on several projects bridging the gap between the traditional art world and the latest technological innovations, including the art collector database Larry’s List and ART x TECH hackathons. She is currently working to educate and engage the broader public about the latest developments in creative AI.

Over the past couple of years, there has been increasing interest in applying the latest advances in machine learning to creative projects in art, music, film, theatre and beyond. From Google’s DeepDream and style transfer to the world’s first computer-generated musical playing in London’s West End, more and more creative AI projects are moving beyond the world of research and academia into the public eye. The business side of creative industries is catching up too. Applications include AI for discovery, personalisation, interaction and creative process augmentation. This talk will give an overview of how artists and creative businesses are experimenting with AI.