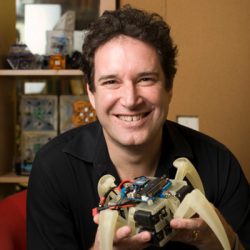 Hod Lipson is a professor of Engineering and Data Science at Columbia University in New York, and a co-author of the award winning book “Fabricated: The New World of 3D printing“, and “Driverless: Intelligent cars and the road ahead“, by MIT Press. Before joining Columbia University in 2015, Hod spent 14 years as a professor at Cornell University. He received his PhD in 1999 from the Technion – Israel Institute of Technology, followed by a postdoc at Brandeis University and MIT. Hod Lipson’s work on self-aware and self-replicating robots challenges conventional views of robotics, and has enjoyed widespread media coverage. He has also pioneered open-source 3D printing, as well as electronics 3D printing, bio-printing and food printing. Lipson has co-authored over 300 publications that received over 14,000 citations to date. He has founded four companies, and is frequent keynoter both in industry and academic events. His TED Talk on self-aware machines is one of the most viewed presentations on AI and robotics. Hod directs the Creative Machines Lab, which pioneers new ways to make machines that create, and machines that are creative.

Artificial Intelligence technology has been making grand strides over the past few years, outperforming humans in tasks once thought to be impossible. Machines can now recognize images, interpret audio and understand language with unprecedented reliability. But where will this technology go next, and how far can it reach?

This talk outlines a brief history of AI, and its embodied cousin, Robotics. We follow the field from its inception nearly a century ago, into its accelerating ascent of recent year, and into the future.

AI is a beneficiary of several compounding exponential technologies. But unlike smooth progress observed in many other areas, AI progresses in distinct waves. Each wave leaps forward as a new fundamental capability is mastered, then lulls us into complacency until a wave washes over.

The first AI paradigm was based logic and search, and dominated AI thinking for nearly 40 years. In the 90s, the second wave of data analytics rose, ushering the period of big data. The third wave Cognitive Computing is unfolding as we speak, and the fourth wave of creative Machines is just around the corner. Two more waves are swelling in the distance.