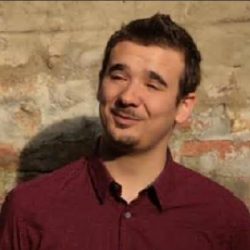 Alex Champandard is an artificial Intelligence specialist, game developer, and Editor-in-Chief at AiGameDev. He has worked in industry as a senior AI programmer for many years, most notably for Rockstar Games. There he worked the motion technology that powers the R.A.G.E. engine (proprietary middleware used in all Rockstar titles internally, including the animation-intensive ROCKSTAR’S TABLE TENNIS) and was initially involved developing the artificial intelligence and gameplay for MAX PAYNE 3. He regularly consults with leading studios in Europe, most recently on the multiplayer bots for KILLZONE 2 at Guerrilla Games.
With a strong academic background in artificial intelligence, he authored the book AI Game Development and often speaks about his research — in particular at the Paris Game AI Conference which he co-organizes with his wife Petra. He is Associate Editor for the IEEE Transactions on Computational Intelligence and AI in Games (TCIAIG), is a member of the Program Committee for the Artificial Intelligence in Interactive Digital Entertainment (AIIDE) conference, and part of the Organizing Committee of Computational