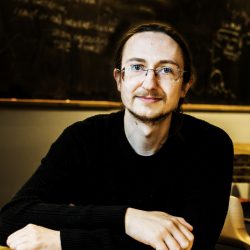 Nicholas has a background in physics (PhD from the University of Illinois at Urbana-Champaign) but has been working on a wide variety of computational models ranging from turbulence to evolutionary algorithms to prebiotic chemistry. Currently, he is working as a data scientist at Araya, and as an affiliated researcher at the Earth-Life Science Institute at the Tokyo Institute of Technology. Overall, his scientific motivations could be described as: ‘what phenomena do we not understand well enough to make, and how can we become able to make them?’

At Araya, this centers on using knowledge about the interaction of components in complex systems to design machine learning architectures whose behavior emerges from interacting sub-parts. When a network does not have a global optimization task, but has sub-components each with their own task, the overall behavior can be much richer but also harder to control. In addition, he is interested in the question of understandability – how can a system be designed such that it tries to make itself easier to understand for humans, or to transfer its knowledge to other machines efficiently?

【Day 1-7】Emerging Technologies for the Future